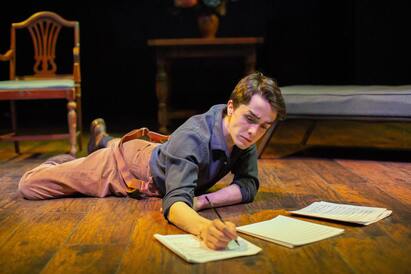 Real produced by The Tank
"...Kia Rogers (lights), the tiny space glows with rich color, which seems to trap the actors like insects in amber."
American Theatre, by Helen Shaw. Published: January 14th, 2019

​Thieves Produced by Rising Phoenix Rep, Weathervane Productions & Rattlestick Playwrights Theater
...while Kia Rogers’ lighting design ups the dramatic ante every step of the way.
StagesceneLA, by Steven Stanley. Published: March 20th, 2015
​
Angeles / Almas produced by Flamenco Vivo Carlota Santana
The second half of Angeles / Almas went even further in towards an increasingly intimate portrayal of the heart of flamenco. The introspective sentiments of the flamenco artist became the highlight of the stage at the sharp hand of lighting designer Kia Rogers.
BWW review, by Matt Hanson. Published: May 26, 2015

Margo Veil Produced by UNCW Theatre
Guest lighting designer Kia Rogers’ work is seamless; it is so beautiful. Subtle would be the best way to describe it. She has one in particular, special down-stage center—a triangle (accentuating the three bodies that Margo Veil will inhabit) which slowly changes colors, disappears and reappears throughout the course of the show. It doesn’t have to be overt and stark; it makes a stronger impression with its nuance. Rogers is a UNCW alum currently working as a designer in New York City. Outside of the opportunity to work with someone of her caliber, it must be an inspiring experience for the students to work with a graduate from the same program, who has encountered professional success. Rogers’ kind and generous nature lends itself to a natural mentoring attitude, and hopefully some of the design and production students are taking advantage of the opportunity.
Encore Magazine by: Kaitlin Willow, April 2012

In The Summer Pavilion Produced by Go In Her Room Productions
Kia Roger's lighting is also noteworthy: She defines half a dozen decades and spaces with ease, no small feat considering the limited light board.
Alexis Soloski  FringeNYC reviewer: August 2011

All The Rage  Produced by Manhattan Theatre Source
The lighting from Kia Rogers emphasizes the disjointed, shattered feeling of the play.
nytheatre.com review by Josh Sherman · July 31, 2008